To introduce this topic, let’s start oﬀ with an interesting fact: Anything with a temperature above absolute zero (-273°C) has heat energy in it. As well, anything warmer than absolute zero has stored energy. Geoexchange technology captures and uses stored heat from the ground for providing energy-efficient heating and cooling for buildings ranging from single family residential homes to the largest institutional and commercial buildings. What makes geothermal energy even more interesting, is that this isn’t new technology. The technology has existed for decades and has been improved, and adapted upon. With wise and thoughtful design adapted to specific site conditions, geoexchange systems can be cost-effective, and can be adapted for homes, commercial and institutional buildings, and industrial process applications.

Why is there a growing interest in Geoexchange?

How does it work?

The geoexchange principle relies on a specific application of the refrigeration cycle for transferring heat from one place to another. By moving heat instead of converting chemical energy into heat (e.g. fossil fuel combustion), geoexchange systems can often provide space and/or process heating (and cooling) in a much more energy-efficient manner than conventional heating or cooling systems. Geoexchange heat pumps can extract energy from low-grade heat sources (at temperatures below 5°C) and “concentrate” the heat to a higher temperature for delivery to a heated environment. Hence, heat pumps can be coupled to a ground heat exchanger (often consisting of buried piping within the earth) so that the ground becomes the heat source for the system.

The ground energy harnessed by geoexchange systems is renewable energy. Most of the energy captured by geoexchange is solar energy absorbed by the earth’s crust while a smaller portion is core geothermal energy. In the geologically diverse western cordillera of BC, the core geothermal component varies from site to site and in some cases anomalously high geothermal gradients may cause the core geothermal component to be significant. Although electrical energy is required to drive the heat pumps, carefully designed geoexchange systems are capable of achieving coefficients of performance (COP) exceeding 3.5 in heating mode (COP is the ratio of the total heat delivered by the heat pumps relative to the electrical energy required to drive the heat pumps). At a COP of 3.5, 71% of the total heat delivered is renewable energy transferred from the ground and the remaining 29% is derived from grid electricity. Types of

Ground heat exchangers (GHXs) can take many forms, but all forms belong to one of two broad categories:

The four most common types of GHX are: 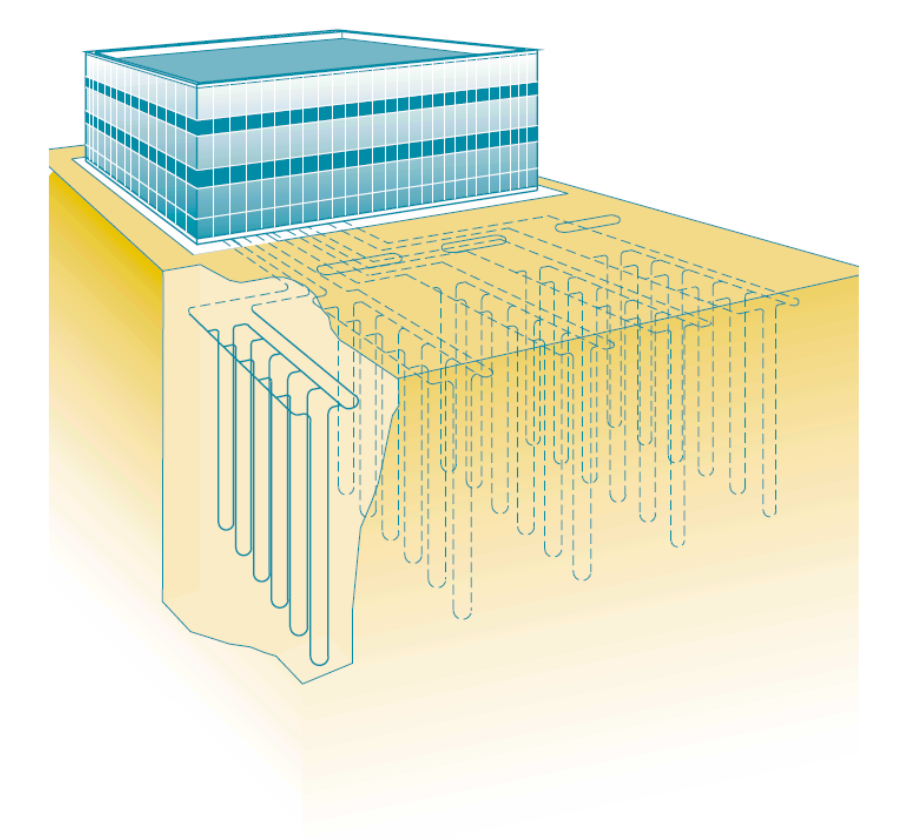 Systems comprised of a network of vertical boreholes are the most common type of geoexchange system – but sometimes other types of systems are suited depending on site-specific setting. (Source: Natural Resources Canada)

There is a common misconception that the temperature of the soil/rock surrounding a closed-loop GHX remains constant despite the transfer of heat in and out of the ground through the GHX. As a result, there is a widely-accepted perception that geoexchange systems always operate at a consistent performance level because they supposedly tap an “unlimited availability of heat at a constant ground temperature”. Unfortunately, this perception is false and misleading and often leads to inappropriate applications of geoexchange. In fact, the ongoing thermal interaction between the heat pump system and the closed-loop GHX causes the temperature of the soils that are thermally coupled with the GHX to fluctuate. The GHX temperature varies in response to the “rate” (power) and the cumulative “quantity” (energy) of heat extracted from (or rejected into) the earth and can be quite sensitive to the relative balance of the annual heating and cooling loads. Temperature fluctuations are damped as a function of site-specific soil thermal properties and the size and configuration of the GHX. As a general rule, the better the soil thermal properties, the bigger the GHX, and the more balanced the annual heating and cooling loads, then the more stable the GHX operating temperatures.

Proper accounting for these relationships is important for selecting appropriate GHX option(s) and it is crucial for supporting effective and sustainable design of the selected option.

Closed-loop type of geoexchange systems operate most effectively when they serve both heating and cooling loads. In cooling mode, the heat is transferred into the ground causing the soils in proximity to the GHX to warm and store heat. Then in the winter cooling mode the stored heat can often be re-captured from the ground for heating purposes. In this manner the heat is essentially “recycled” from season to season, resulting in considerably less strain on the GHX, and allows the GHX to behave more as a store and less as a source of heat.

With careful design, geoexchange systems can be designed to sustainably serve one-way heavily dominant heating loads. For closed-loop type of systems, bigger GHX systems are typically required to serve one-way loads (e.g., more boreholes or deeper boreholes), and the spacing between the boreholes needs to be significantly increased so that the GHX is in thermal connection with a much greater mass of soil from which to transfer heat. For open-loop type systems serving one-way loads, greater attention to the separation between extraction and return points is required.

Importance of the Options Analysis Step

The cost for constructing the GHX portion of geoexchange systems varies by a factor of nearly ten-fold per unit capacity.

The large range is attributed to many factors including:

An objective evaluation of site-specific conditions and available site-specific options at an early stage in the planning process can help identify unique geoexchange opportunities (improving technical performance, reducing cost, or managing risk), and can help identify constraints or limitations that may impede suitability for geoexchange adoption.

What are geoexchange solutions best suited for?

The Importance of a Thorough Design

While geoexchange heat pump systems aren’t particularly complex, they do require thoughtful and thorough design, and particular care in optimizing the integration of the geoexchange subsystems including:

Heat pumps deliver heat differently than combustion systems and the design of the systems needs to take this into account. Falcon Engineering has developed a core expertise in optimizing heat pump performance based on careful monitoring of the performance of several dozen large institutional geoexchange heat pump systems we’ve designed. We’ve aggregated a lot of lessons learned expertise.

In particular cases, such as the Canyon Falls Middle School in Kelowna, our team implemented geoexchange technology to heat and cool the school. The system consists of a network of 24 boreholes drilled deep into the underlying bedrock to a depth of 600 feet. Along with geoexchange, the school was equipped with solar PV panels, LED lighting, occupancy based controls, and a network automation system to reduce the energy use intensity of the school.

The net result is a near elimination of carbon emissions relating to the operation of this school. In this case, Falcon Engineering Ltd. provided mechanical, electrical, and energy system engineering services including energy modelling and geoexchange system design.

As a leader in green, energy eﬃcient building systems, Falcon Engineering is well-suited to identify and implement low carbon energy solutions, including geoexchange where it is suitable, or identify other suitable low carbon alternatives for speciﬁc buildings in speciﬁc settings. At Falcon Engineering, our clients demand low carbon energy strategies to help guide their decision-making today, for achieving compatibility with tomorrow’s expectations. Reach out to us to speak with our highly qualiﬁed team of engineers, scientists and technical analysts about your geoexchange needs.

Want to learn more about energy engineering? Check out some of our other blogs!